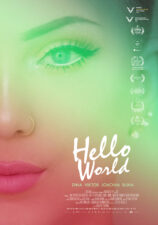 HELLO WORLD is a celebration of kids and young people who have the courage to be different and take pride in their identities, whether it’s coming out, colouring their hair blue or dressing without conforming to gender. While their classmates and friends are doing everything to fit in, Runa 12, Dina 13, Viktor 12, and Joachim 14, are defining themselves differently. They are the first people to be openly gay in their classes and the youngest ones in their respective communities to come out. Will life as an open queer become easier over time? Hello World is a fun, engaging and moving coming-of-age story about being true to yourself.

A co-production with TV2 in Norway and SVT in Sweden.

Developed in the Eurodoc 2018 program.