Christer Böke has taken one year off from his well-paid job as an IT-salesman to become a full-time Alchemist. This is a close documentary portrait of an intelligent and extremely dedicated young man and hopefully a reminder to all viewers that dreams can be realized and anything is possible.

The documentary follows Christer from the day he leaves the city to the first day back at work the next year. During this year he moves to the island of Gotland on the Swedish countryside where he builds a laboratory in his dead grandfather’s garage, he lives three months in France to study the language and exchange ideas with French alchemists.

Will Christer succeed in making gold? What will happen if he does or doesn’t? The quiet life on the countryside changes Christer and gives him new values. Christer will not be the same young man when this year is over. 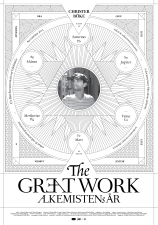